Special Session Is Underway – Wednesday marked the start of the 31st special session of the Nevada Legislature and lawmakers went to work immediately on the budget shortfall for Fiscal Year 2021, leaving the possibility open for a future special session to address various issues relating to policy.

Suspension of the Rules & Republican Criticism – Upon convening, both the Senate and Assembly suspend certain rules allowing for remote voting and requirements for masks, with the exception of those testifying. The rules also require lawmakers to monitor their health and set guidelines for reporting COVID-19 exposures. The rule allowing lawmakers to participate in legislative activity remotely received opposition from various Republican lawmakers. Senate Minority Leader James Settelmeyer (R) and Senator Joe Hardy (R) raised the issue of accountability and the responsibility to the Constitution that dictates rules of the legislature, which requires lawmakers to be present in Carson City, no matter how inconvenient or costly. Assembly Minority Leader Robin Titus (R) pointed to past precedent that allowed those who were ill or had personal obligations to skip the day’s proceedings. The rule passed by a voice vote in the Assembly with a number of audible “no” votes and passed on a party-line recorded vote in the Senate.

New Revenue Streams to Fill Shortfall? – As the legislature looks at current revenue streams to redirect toward fiscal year 2020-2021’s budget, any new revenue stream or tax would require a two-thirds majority vote. While there does not appear to be an appetite to impose any tax increases on businesses that are still weathering the pandemic, minor tweaks or technical fixes could occur, such as rolling back abatements or tax incentives. However, a direct tax increase is not anticipated. Lawmakers are expected to continue working through difficult decisions on fiscal cuts and furloughs before the policy discussion on potential new revenue streams.

Special Session Timeline & Second Round to Tackle Policy? – It is rumored that bill draft requests (BDRs) will begin to be introduced Thursday, however many believe the focus will remain on the budget through the weekend. Once the budget items are closed, a second proclamation could be issued immediately rolling the legislature into a second special session to take up potential policy items including but not limited to police reform, employer liability shield from COVID-19 claims, and unemployment components. Notably, there is no requirement for how much notice must be given to call a special session – a proclamation simply must be issued. If the policy special session is not consecutive from the budget session, it is anticipated that the so-called policy special session will occur later this month or in August. If Governor Sisolak does not call for a second one, legislators can call themselves into a special session with a two-thirds vote.

$1.15-billion Grim Financial Shortfall– Both the Senate and Assembly received a presentation from the Governor’s Office of Finance providing an overview of the current budget shortfall estimated at $1.15-billion, as well as a summary of proposed measures to address the hole. The proposed actions from the Governor’s Office of Finance are as follows:
The following are projected revenues anticipated to be received that will be allocated toward fiscal year 2020-2021’s budget. If furloughs are implemented, it is estimated to decrease an employee’s yearly salary by roughly 4.6-percent:

The following appropriations were approved during the 2019 legislative session and will now be instead allocated to fiscal year 2020-2021’s budget:

The following revenues will be transferred from these accounts and will be allocated to fiscal year 2020-2021’s budget: 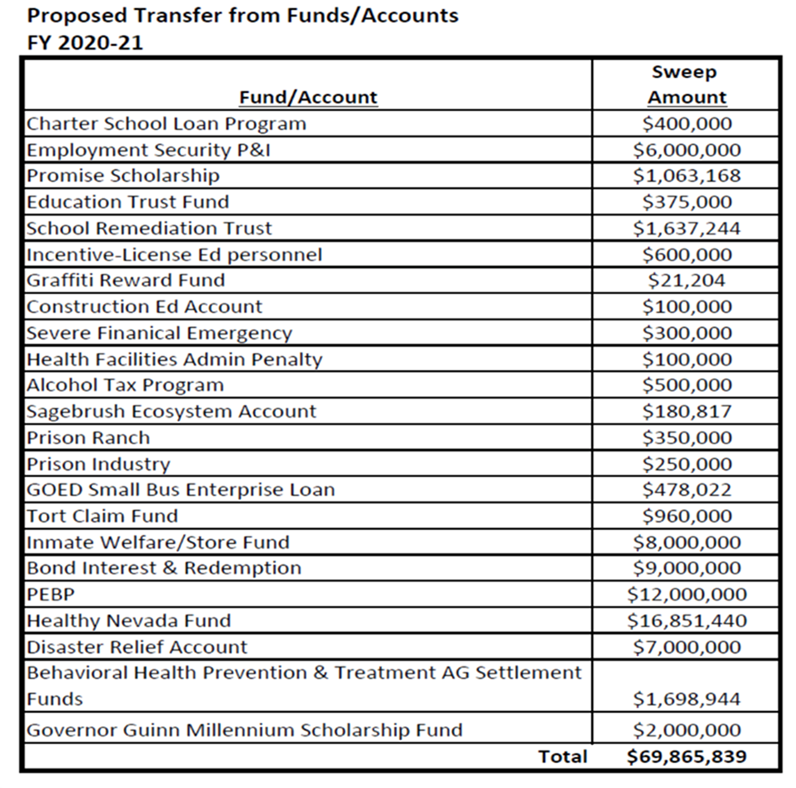 Medicaid Reimbursement Cuts – The Senate Committee of the Whole heard from the Department of Health and Human Services Wednesday highlighting the department’s proposed budget cuts, which provide for a 14-percent reduction in overall spending. The Department proposes a 6-percent reduction in Medicaid reimbursement rates across the board, effectively backtracking rate increases and other policies that were passed in the 2019 legislative session. Several optional services are being proposed to be eliminated, including adult access to prosthetic devices, neuropathy, occupational therapy, chiropractic services, podiatry, optometry and dental services. Among services being limited are dental services for pregnant women and children, physical therapy for adults and hospice. The proposed budgetary cuts are conditioned on whether the 6.2-percent enhancement to the Federal Medical Assistance Percentages is extended an additional 90 days. If it is, Medicaid funding in the state would receive an additional $30-million before the end of the year and provide the Department more flexibility in its cuts.

Education Cuts “Least Damaging Option” – Nevada State Superintendent Jhone Ebert and Clark County Superintendent Jesus Jara addressed the Assembly Committee of the Whole and provided legislators with an update on the Department of Education’s response during the pandemic and plans for the school year ahead. Among some of the cuts specifically mentioned during the presentation were $31-million cut from literacy specialists, $2.7-million cut from school resource officials such as social workers, and the defunding of SB 178, which would have increased funding for children with special needs by $1,200 per pupil. There are no cuts to the Distributive School Account in the proposed plan. The education leaders argued that while any cuts made to education will inflict harm, the plan presented today is the least damaging option. A full list of proposed budget reductions within the Department of Education can be found here: Department of Education Budget Recommendation