Our Government Affairs & Advocacy Team is dedicated to keeping you informed as we continue facing the novel coronavirus. We will provide daily updates, with additional resources available on our website.

Additionally, we will keep you informed of Nevada primary election results and updates as they become available on our website and through additional e-mail correspondence. Please stay tuned for further information as it becomes available.

Nevada Primary Numbers – The Nevada Secretary of State’s office reported Tuesday that 488,761 individual ballots have been tallied so far in the 2020 primary election, or 30.1-percent. Of that number, 44-percent were Democrat, 40-percent were Republican, and 16-percent were “other.”

In one of the closest races in the state, Roberta Lange has taken the lead in Senate District 7 over Assemblywoman Ellen Spiegel for the first time in a week, by just 93 votes. In total, 8,669 of the votes have been calculated, or 27.4-percent of registered Democrats in the district. The race will most likely come down to the final day, which is Friday, June 19. 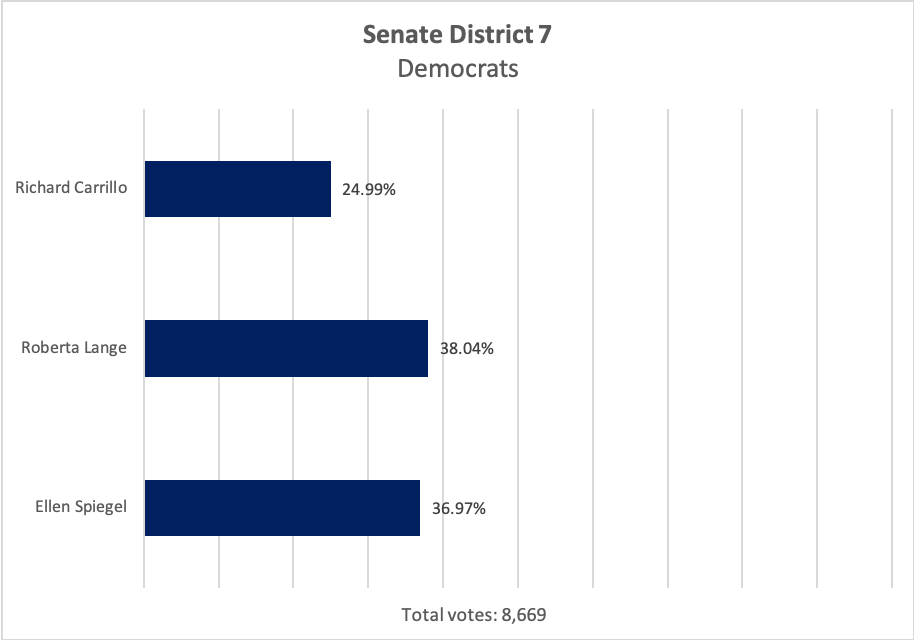 Clark County Cases Increase – Clark County announced Tuesday the largest single-day increase of new COVID-19 cases since the state’s outbreak began in March. The uptick moved the county’s cumulative test positivity rate up 0.6-percentage points, the second time an increase has occurred since early May. In total, Nevada saw an uptick Monday of 379 cases, a growth rate of 3.4-percent. Southern Nevada officials, however, attribute the rise to an increase in testing, as Clark County administered 5,600 tests Monday. Additionally, Clark County also reported the first death of a child between the ages five to 17 from COVID-19, bringing the countywide death total to 380.

Nevada Museum of Art to Reopen – The Nevada Museum of Art announced plans Tuesday to reopen in phases, after being shuttered since mid-March when the shutdown of non-essential businesses was put in place. After being tasked by the Governor’s COVID-19 Task Force in April to draft an Operating Reopening Plan, the Museum was able to put together guidelines which have been reviewed by healthcare groups and was approved by Governor Steve Sisolak’s office. The Museum plans to reopen this week, with a free community day on June 20, courtesy of the Estelle J. Kelsey Foundation.

Clark County Encouraged to Remain Compliant – Clark County Commission Chairwoman Marilyn Kirkpatrick announced Tuesday that no more businesses in her jurisdiction will be allowed to reopen until Nevadans begin taking social distancing and COVID-19 safety precautions seriously. Citing a personal experience at a department store Monday, Chairwoman Kirkpatrick observed hit and miss face coverings and hand sanitizer unavailable to customers. “In order to stay open, we have to stay safe,” said Chairwoman Kirkpatrick during Tuesday’s commission meeting. “I’m not opening one more thing until people get compliant. Bottom line.” Kirkpatrick’s comments come one day after Governor Steve Sisolak announced that the state will extend Phase 2 until at least June 30, as cases throughout Nevada continue to increase. As of noon Tuesday, Nevada has reported 11,658 cases with 467 deaths.

Lawmaker PPP Loans Questioned – At least four members of Congress, or their relatives, received money under the federal Paycheck Protection Program (PPP), including Nevada Representative Susie Lee (D). While it is not illegal for members or their families to apply for and accept the loans, lawmakers are facing scrutiny over whether they fought for rescue programs for their personal benefit. Representative Lee helped lobby for casinos to be included in the PPP program, and her husband’s casino company later received millions of dollars. Additionally, Representative Vicky Harzler (R) of Missouri, Representative Debbie Mucarsel-Powell (D) of Florida, and Representative Roger Williams (R) of Texas all received loans themselves or had family members that benefited from different aspects of the PPP loans.

Las Vegas Will Have Fireworks – While July 4 will look different around the country, the Plaza Hotel Casino is planning to hold a live fireworks show in downtown Las Vegas, the only of its kind planned at this time. According to a press release, the show will be staged at multiple locations on the hotel’s towers and roofs and has the potential to be seen for miles. Most live firework shows across the state have been canceled due to the COVID-19 pandemic.

Florida Continues to See Increases – Florida reported an additional 2,783 new confirmed COVID-19 cases Tuesday, setting another daily record high in a state the continues to ease social distancing restrictions and allowing more businesses to reopen. During the entire month of May there were only a handful of days when Florida reported more than 1,000 new cases in one day. Despite the uptick, Governor Ron DeSantis (R) attributed the increase to more testing and dismissed the idea that recent infections stemmed from the reopening of businesses, while remaining adamant that the state would not move backward and shutter activity again. There have been at least 80,101 coronavirus cases in Florida, the eighth highest in the nation, with at least 2,992 deaths.

U.S. Market Shows Promise – The U.S. stock market posted promising numbers Tuesday, after a surprising report showed that retail sales jumped 18-percent in May. The large and stronger than expected jump came after April numbers showed the largest-ever monthly collapse in retail sales. While the economy continues to show promising signs, officials Tuesday stressed caution, as total recovery could take a long time, especially in terms of the labor market.

LGBTQ Win Landmark Case – In a landmark case Monday, the Supreme Court ruled the LGBTQ workers are protected from job discrimination, citing Title VII of the Civil Rights Act of 1964 which makes it illegal for employers to discriminate due to a person’s sex. The 6-3 vote upholds a ruling from lower courts that said sexual orientation discrimination was a form of sex discrimination, coming as a surprising move from an increasingly conservative court. Joining the court’s four liberal members to form a majority was Chief Justice John Roberts as well as Justice Neil Gorsuch, who was President Donald Trump’s first Supreme Court appointee and author of the decision. The ruling comes as a major victory for advocates of gay and transgender rights.