Our Government Affairs & Advocacy Team is dedicated to keeping you informed as we continue facing the novel coronavirus. We will provide daily updates, with additional resources available on our website.

Additionally, we will keep you informed of Nevada primary election results and updates as they become available on our website and through additional e-mail correspondence. Please stay tuned for further information as it becomes available.

Nevada Primary Numbers – Nevada’s primary election is officially over, but results will not be official for nine more days, or so — June 19 — as we wait for mail-in ballots postmarked by June 9 to continue making the way to their respective county voter registrar’s office. Voters cast ballots in Nevada’s two largest counties, Washoe and Clark, late into the night, but some results from the state’s smaller counties began to trickle in Wednesday, with many races too close to call. Here are a few of the top races our Government Affairs & Advocacy team is watching throughout the state:

In Congressional District 3 (CD 3), incumbent Congresswoman Susie Lee has a commanding lead over her other Democratic opponents, poised to easily become the Democratic nominee for CD 3. On the Republican side, however, the race is close, with Dan “Big Dan” Rodimer holding an 11-point lead over former Nevada Treasurer Dan Schwartz. With very few returns reported, this race will be one to keep a close eye on. 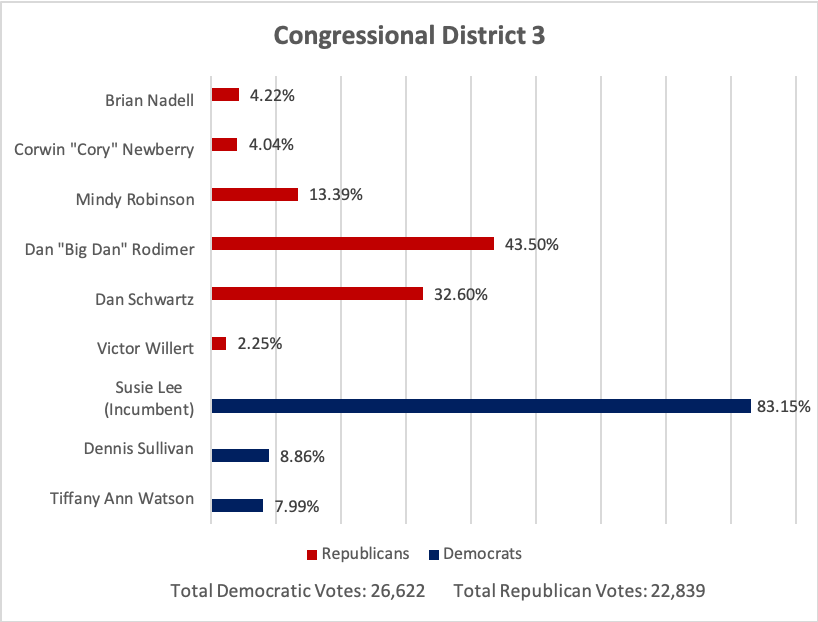 In Senate District 7 (SD 7), Assemblywoman Ellen Spiegel holds the lead over Assemblyman Richard Carrillo and Democratic caucus endorsed Roberta Lange. Assemblywoman Spiegel outraised both candidates. The seat is being vacated by Senator David Parks, who is term limited. Both Spiegel and Carrillo decided to run for the empty seat. The Senate Democratic Caucus endorsed Lange, who is the former Nevada Democratic party chair. All parties have been campaigning hard for the hotly contested seat, and with no Republican opponent, the primary winner will appear on the general election ballot in November and must only receive one vote to win the seat. 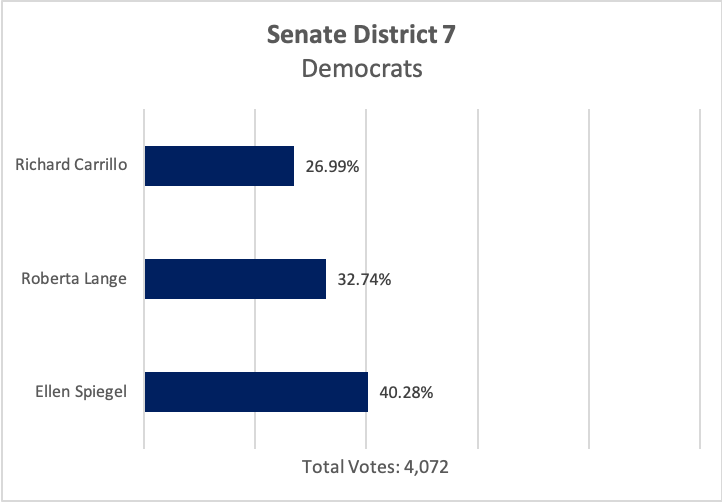 District Court Judge Douglas Herndon holds a sizable lead over Assemblyman Ozzie Fumo, who is a criminal defense attorney seeking his first judicial seat. A third candidate, attorney and former Assemblyman Erv Nelson, also garnered a small percent of the vote. The top two winners of this race will again face off in the general election in November. The race for Supreme Court Seat D has become one of the spendiest judicial campaigns, with Justice Herndon raising more than $338,000, more than twice what Fumo raised, which is a staggering amount not typically seen in a judicial race. The winner will fill the seat being vacated by Justice Mark Gibbons. 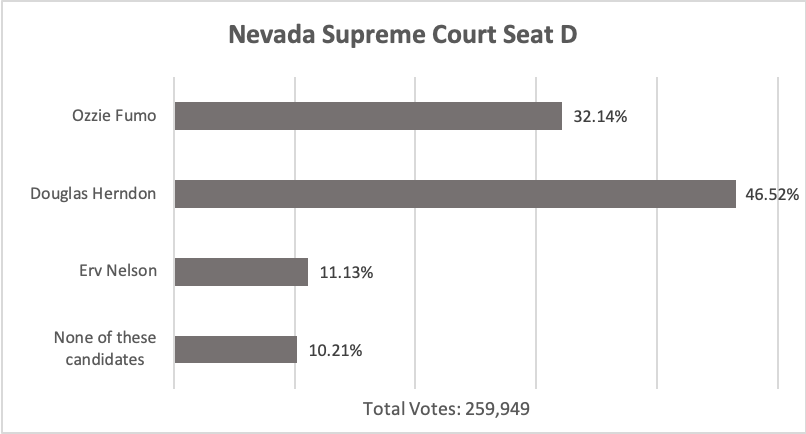 Clark County Commission District D
Assemblyman and Chairman of the Nevada Democratic Party William McCurdy II holds a commanding lead over his opponents in the race for Clark County Commission D, in what was a packed race that included state Senator Moises “Mo” Denis. The numbers are slightly deceiving, however, because only 5,835 votes have been counted in the race that includes five other individuals. The winner of the race will face off against three independent candidates in the November general election. Assemblyman McCurdy gave up his seat to run for the County Commission, but in the event that Senator Denis loses, he will still retain his Nevada senate seat. 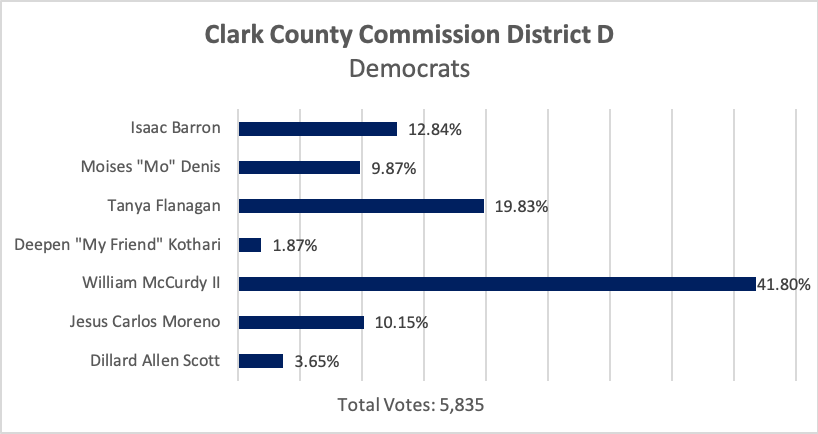 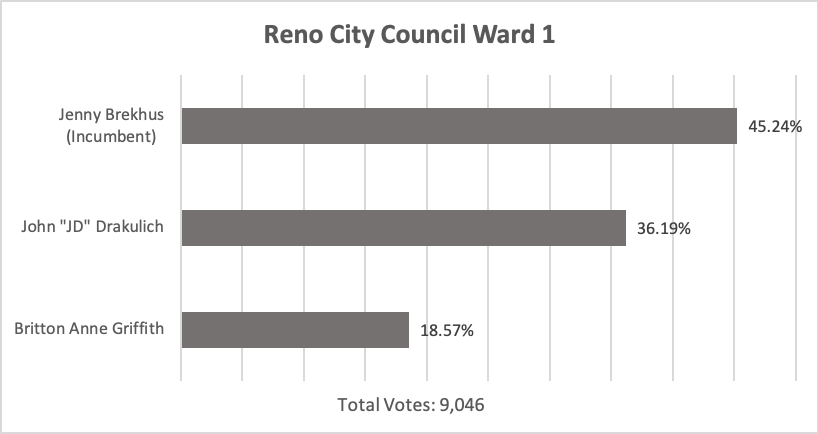 Plugging the Budget Hole – Governor Steve Sisolak released a plan Tuesday to further fill the nearly $812-million hole in the fiscal year 2020 budget caused by plummeting tax revenue amid the COVID-19 pandemic. The proposed plan includes $67-million in reductions to state agency operating expenses, as well as $49-million in the reversal of appropriations awarded during the 2019 legislative session that have not yet been spent. The Interim Finance Committee (IFC) previously approved the transfer of the state’s “Rainy Day Fund” of $401-million to help fill the budget hole. The latest steps proposed by the Governor, as well as the sweep of the Rainy Day fund, are expected to address $612-million of the shortfall, with the remaining $200-million to come from dollars already allocated through a reduced Disaster Relief Account transfer and funds left over from fiscal years 2019 and 2020. IFC is scheduled to meet Friday to approve the spending plan.

Officials Warn of Case Increases – During a press conference Wednesday, Washoe County Health District Medical Officer Kevin Dick stressed that northern Nevadans should not let their guard down, following a spike in the number of positive COVID-19 cases since May 10. Dick explained that while it is expected for more testing to lead to an increased number of cases, the uptick in hospital cases is most concerning. As of yesterday, COVID-19 hospital cases in the state have been on the rise for the fifth day in a row. In total, Washoe county has tested 37,253 people, or 7.7-percent of the population, for COVID-19 since the beginning of the pandemic.

Washoe County Schools Make Plans to Reopen – The Washoe County School District (WCSD) is asking families, students, and staff to participate in a survey on priorities for the 2020-2021 school year, as the district considers all options for the return to school year slated for August 10. According to the district, the goal is to give parents and staff and idea of what the upcoming school year will look like, WCSD anticipates releasing information as early as July. The 12-15 question survey asks a number of questions, including whether families will be inclined to send students back if there is a coronavirus vaccine, if they will be comfortable if masks and daily temperature screenings are required, how digital learning could be improved, and more. Washoe County School District families have until June 26 to fill out the survey.

Starbucks Takes COVID-19 Related Hit – Seattle coffee giant Starbucks is planning to close up to 400 U.S. stores in the next 18 months, after a regulatory filing with the U.S. Securities and Exchange Commission Wednesday showed that the company’s operating income will be slashed by more than $2-billion for the 2nd quarter of 2020 thanks to COVID-19. The company is said to take a revenue hit potentially exceeding $3-billion in its third quarter, with final numbers to be released July 28. Starbucks was forced to close its stores to customers during the COVID-19 pandemic but continued to operate drive thru and pickup in many locations. As a sign of the times, with many employees still unable to return to work around the country, the company plans to accelerate its plan to build smaller pickup only locations in major U.S. cities, while also retrofitting some of their cafes to better accommodate mobile pickup and delivery orders. Starbucks has 8,000 stores in the United States.

Study Provides COVID-19 Insight – Preliminary results in an ongoing study by the genetic testing firm 23andMe indicate that people with Type O blood are between nine and 18-percent less likely to test positive for COVID-19 when compared to other blood types. In April, the company began using its testing services to help scientists better understand how genetics may play a role in why some people who contract the virus develop severe infections, while others present only mild or moderate symptoms or have no symptoms at all. The study involved 750,000 participants. While the results are early, an additional study out of China published in March also found that Type O blood was potentially more resistant to SARS-CoV-2, while those with Type A blood may be more at risk.